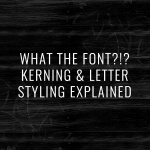 I love fonts. They can evoke feelings much in the same way as colors. Some fonts are fun and flirty while others are super serious. And some fonts (like Comic Sans and Papyrus) should just be removed from existence  😬

NOT ALL FONTS ARE CREATED EQUAL

Sometimes it’s the styling of the letters themselves, but more often than not, it’s kerning that poses an issue. Kerning is the amount of space between two letters (or other characters like numbers, punctuation, etc.) and the process of adjusting that space to ensure that the text is legible. If the kerning is too tight, letters will touch or overlap (like the image here… whoa!). And if it’s too loose, you’ll end up with awkward gaps between your letters. Kerning can make or break your design. Another form of letter spacing is tracking – which applies to the overall spacing among a whole group of letters.

Improper kerning has the ability to take your innocent logo or phrase and turn it into a total marketing disaster.

The wrong amount of kerning has the ability to take your innocent logo or phrase and turn it into a total marketing disaster. Great for those of us who can sit here and giggle about it, but imagine the embarrassing nightmare and cost of reprinting these businesses had to go through.

And it’ll save you a ton of embarrassment 🙈 and money 💰 later.

The default kerning on some fonts just isn’t ideal for certain letter combinations. The images here are a perfect example of that. If you find that the default kerning of the font you’re using isn’t what you’d like, you’ll want to adjust it manually. You’ll want to ensure the spacing between all the letters looks consistent. Keep in mind that you’re aiming for perceived space between the letters, not the actual distance between them.

Here’s one that’s not a kerning issue, but a letter styling fail. I can’t speak for your “special aunt”, but if I saw this card, I’d buy it in a heartbeat and throw that baby in the mail. And as soon as she opened it, my Auntie would call and we’d laugh our asses off at the font disaster 😂

But what if your aunt doesn’t have the same sense of humor as mine? There goes your inheritance 😳

DIDN’T ANYBODY LOOK AT THESE BEFORE THEY WERE PRINTED??? YIKES!

Using Design to Bridge the Gaps in Business and in Life

How to Add Google Analytics to WordPress

How Can I Simplify my Work Life?